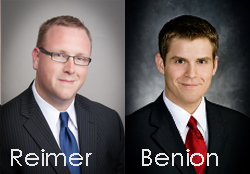 From April 20 - 23, 2017, the State YMCA of Pennsylvania Youth & Government Program held its 2017 Pennsylvania State Model Convention in Harrisburg, PA. The annual event is a gathering of nearly 700 junior and senior high school students in the YMCA's Youth & Government clubs from across Pennsylvania who spend four days filling the roles of state government - governor, lawmakers, courts, and press - and acting out Pennsylvania's legislative process in full-day sessions.

"The Convention was a tremendous learning experience for me and provides students with an in-depth understanding of the legislative and legal process," said Mr. Reimer. "Regardless of the career path they may choose, the experience is invaluable in helping to create better leaders and more informed citizens."